Germany capitalizes on occupied Norway. The Nazis use Norwegian ports for Axis advantage. However, the Allies also have a connection with Norway. The Norwegian Resistance trades intelligence for supplies and the safe keeping of their King.

November 11, 1944. Off the coast of Narvik. Operating submerged, HMS Venturer carries supplies for the Norwegian Resistance. It encounters German U-Boat 771 travelling at speed on the surface. Venturer’s commander, Lieutenant James Launders, lines up his attack. The four-torpedo spread sink U-771 in six minutes.

December 29, 1944. Before reaching the open ocean, U-864 develops a snorkel problem and is ordered back to port. But, while navigating the shallow and narrow waters of the Norwegian coast the U-Boat runs aground. Luckily the vessel sustains minor damage and the lethal cargo: 67 tonnes of weapons grade mercury, remains intact.

January 12, 1945. Bergen. An RAF raid targets U-boat pens. A Tallboy “earthquake” bomb hits pen No.3 where U-864 is housed for repairs. It survives the attack. U-864 leaves Bergen one month later for Japan. But, a misfiring-diesel engine means Wolfram must turn back again. He is ordered to wait for an escort in the waters near Fedje.

February 1945. HMS Venturer and Lt. Launders hunt Axis shipping returning to Bergen. However, a coded message sends Launders to the coast of Fedje, instead.

February 9, 1945. Icy waters off of Norway). Venturer’s crew identifies a thin mast at three miles away. The V-class sub begins closing in on the target: U-864. When Wolfram detects his predator he zig-zags to evade. Acting quickly, Launders calculates an unprecedented 3-D attack by one submerged submarine on another. He fires four torpedoes at varying depths. The first three miss. The fourth hits.

Launder’s kill of U-864 is the only acknowledged sinking of one submerged submarine by another in WWII. The act revolutionized subsea warfare and helped deliver the war to the Allies. 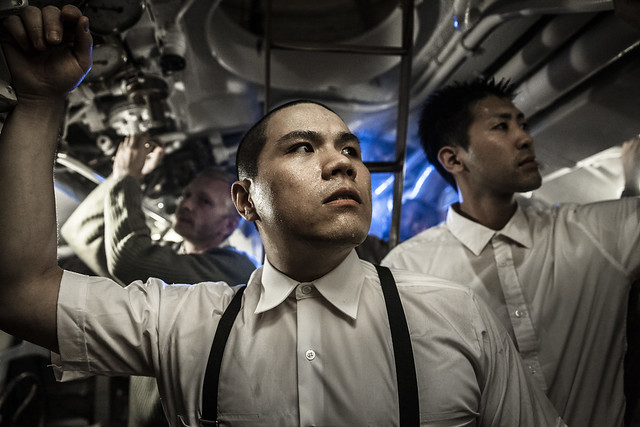