May 1942. Less than six months after the attack on Pearl Harbor, Creed Burlingame commands the first War Patrol of USS Silversides. Like most other naval commanders of the time Burlingame lacks combat experience but he makes up for it with a desire to exact revenge. In their first skirmish with a Japanese fishing trawler however, gunfire kills one of his crew. Everyone aboard USS Silversides understands the sacrifice required by the war effort.

Eight months later, the crew of USS Silversides are completely different men. They’ve gone from being a young, inexperienced group of sailors to hardened veterans. Every depth charge or close call they’ve survived has made them a tight knit group. Now, they sail into the crossfire of the Guadalcanal Campaign.

Guadalcanal is a key island in the US campaign to liberate the Pacific. A strategic lynchpin, both American and Japanese forces fight doggedly for control. USS Silversides must prevent Japanese supplies and reinforcements from reaching Guadalcanal at all costs.

They enter the battle zone near the Japanese stronghold of Rabaul – Japan’s “Pearl Harbor.” What follows is one of the most hair-raising patrols of the Second World War.

A crewman gets appendicitis and requires life-saving surgery. But they’re right next an enemy base and it is too dangerous to surface and request a medical evacuation, never mind actually receive one. The Pharmacist’s Mate Tom Moore has no choice but to operate, even though his operating theatre is a bolted down table in the wardroom. With a shortage of supplies, Moore uses Novocaine to sedate his patient but must think fast when it wears off and the patient wakes up on the table…

Less than an hour later, USS Silversides comes under attack from an enemy destroyer. Depth charging and air bombing almost destroys them and jammed bow planes force the submarine to crushing depths. They struggle to gain control of the submarine before the sea pressure collpases the pressure hull.

But USS Silversides faces its most dangerous challenge when they fire six torpedoes at an enemy tanker – and realize that one of the torpedoes hasn’t left the tube. A literal ticking time bomb, any nearby explosions or physical contact could set it off. 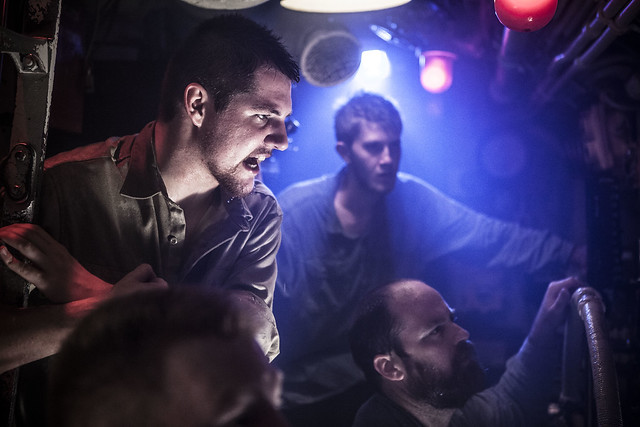